Differences between the two main branches of the Muslim faith go back to the very beginnings of Islam.  The origins of Sunni and Shi’a  began as a political dispute over who the rightful successor should be to follow the Prophet Muhammad as the head of the Muslim state and community he founded.  Muhammad’s senior followers were called the Caliphate.  There are various definitions of what a Caliph is, but essentially it means a deputy or successor, and sometimes is synonomous with “commander”.  For instance, during medieval times, the Caliph was the supreme sovereign of the Islamic empire.  This pervasive kind of  power has waned significantly in most modern Muslim states.

The first Caliph after Muhammad was Abu Bakr, his closest friend and one of the very first converts to Islam.  While  Bakr was known as Abu Bakr “al-Siddiq”, meaning the “upright and truthful”, and many writings indicate this to be accurate, he was not a blood  relative of the Prophet.  For the Sunnis, (whose name comes from the word  sunna meaning the well worn path, the practices of the Prophet) his lineage was irrelevant.  They believed that the leaders of the community were to choose a successor, on the basis of worthiness. However, the Shi’a thought this method of choosing illegitimate, that the Sunnis were usurping power by making this decision.  The Shi’a believed that succession belonged by right to the Prophet’s family.  Muhammad had no son, but a daughter Fatima, who married his cousin Ali.  Shi’a literally means “Party of Ali”. 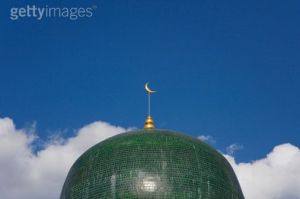 This tension led to a series of armed insurrections in the years following the Prophet’s death.  There was coups overthrowing those in power.  Of the first four caliphs who succeeded the Prophet, three were murdered, and their reigns ended in civil war.  Ali’s sons, Hasan and Husayn were both martyred.  Then there followed a series of claimants to the caliphate, known as Imams (this word is more broadly defined today to include religious teachers) who all  claimed to be descendents of Ali and Fatima.

As an aside, by all accounts, Abu Bakr was a thoughtful and strong leader. It was Abu Bakr who ordered the scattered portions of the Quran to be collected shortly after Muhammad’s death, thereby allowing for an authorized version to be completed within 25 years of the Prophet’s death.  (The immediate occasion of this command was the death in battle of a large number of men who knew much or all of it by heart and the concern that parts of it could be lost forever).  Many of the surahs (chapters) of the Quran are said to have been written down on palm leaves, white stones, the breastbones of humans, animal leather, bits of papyrus (essentially any material until paper was known around the 8th century), but much of the Quran was communicated through oral transmission.

In addition, Abu Bakr’s daughter Aisha was and is (aside from Khadijah, Muhammad’s first wife) the most beloved by Muslims, a gifted leader of the faith in her own right and an example of virtuous living. These early founders continue to be beacons for both Sunni and Shi’a as they practice Islam in their own ways.

Book of the Day, Muhammad, A Prophet For Our Time by Karen Armstrong, “Those who kept the faith were not simply “believers”.  Their faith must be expressed in practical actions: they must pray, share their wealth, and in matters that concerned the community, “consult among themselves” to preserve the unity of the ummah.  If attacked, they could defend themselves, but instead of lashing out in an uncontrolled way, they must always be prepared to forgive an injury…”Hence, whoever pardons his foe and makes peace, his reward rests with God”, the Quran insists tirelessly.”